The questions are valid, and each of these legends is hinted in our passed-down stories.

What if this single event was thwarted by the other gods and their followers - maybe even the Atlanti? What kind of world would humanity inhabit? Would humanity be alone? Would the gods still walk among them? Would the legendary monsters on Earth still be a threat? What creatures were forgotten by time?

Races and nations developed in a similar way, as the Fates do their best to weave reality by their design. The Celtic nations, Rome, Greece, Egypt, Atlantis, Babylon, all exist in a familiar setting.

This is a time of legendary magic and knowledge.

This is a time of legendary faith and deeds.

This is a time of legendary technology and science.

This is the world of Legendary Atlantis.

The landscape is very similar to today's world, with the exception of diverted rivers, lakes, and, of course, the continent of Atlantis. Most of known civilization lies along the Mediterranean sea. 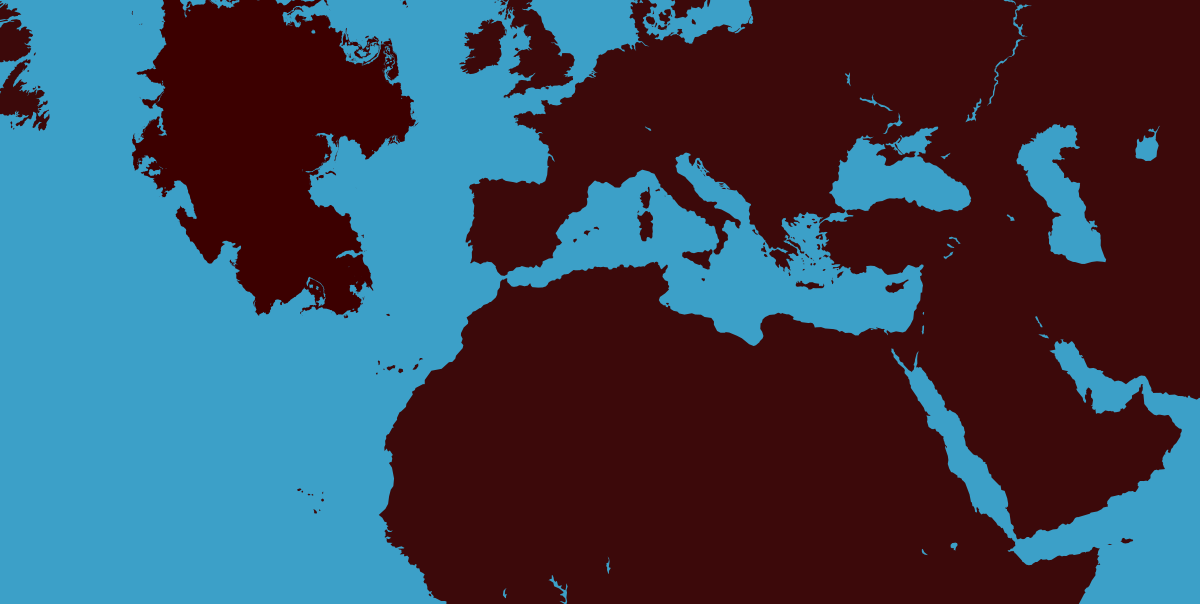 Mankind takes on a new meaning in the world of Legendary Atlantis. All men are equal under the foot of the gods, and since all men speak the same language any creature who can speak and communicate is considered mankind.

None of these species can interbreed, but relations between species are uncommon, and sometimes even accepted depending on the country or state.

Below are just a few of the many intelligent species.

Humanity is identical to the people who exist today. They compromise a majority of civilized races and are the preferred species of most deities.

They come in many build sizes, colors, and heights. They are a diverse people, but will always have one head, two arms, two legs, and no tails. Their faces have two eyes, two ears, a single nose, and a mouth. Any more is an aberration, but not necessarily uncouth. Any less is either obviously an injury or an aberration.

Very closely related to Humanity, there are significant minor differences. They are shorter and stouter than humans with shorter legs, but longer arms. They have a strong, stout frame and are significantly stronger than most men. They have shorter foreheads and thicker skulls, but their body hair is almost exactly that of men.

They are easily confused to humans at a distance or by the ignorant.

They are generally a peaceful, primitive people, but can effectively organize to defend themselves. They exist mainly along the wide southern edge of the Celtic frontier.

These reptilian creatures are thought to be an elder god's first attempt at civilization. They are noble, strong and numerous.

Sons and daughters of the god Gukumatz, these sometimes featured creatures have two eyes, sometimes a long face, two arms (sometimes usable as legs), two legs, and a long, meaty tail. They can range from looking like a scaled man to a giant, upright lizard.

These tall, proud great-cat descendant men are natives from the badlands south of Egypt. Natively they're a primitive people, but further north in Egypt, they fit well into society and can easily hold even the most technical jobs with proper upbringing and training.

These creatures are the direct hands of the deities who still walk the earth. They are not born, they are made, and have an unknown lifespan. They do not seem to age and are known to disappear for decades at a time. They are killable, with difficulty, and are commonly used as messengers for the god or goddesses they serve.

They can be beautiful or horrendous depending on the deity they serve and have powers from their strong, direct bond with their lord.

Because they are created by will, they can controlled or repulsed by immensely strong will or belief.

These giants are proportioned similarly to Neans, but easily tower above all others at least double the height of a man, and many much greater. They are commonly stocky and hundreds of times stronger than men, though there are thinner, weaker variants.

The city-nation of Atlantis are arguably the strongest superpower of this alternate ancient world. The arrogance of the Atlanti have renounced all gods, old and new despite the direct evidence that the gods walk on Earth amongst mortals. They depend completely on their own knowledge of the mystical and technological sciences.

They enjoy the luxury of full plumbing in their cities and their quartz-aurichalcum based technology allows for even gravity to be defied!

It was the Babylonians who were the blame for the near apocalypse. Cain, the Banished, walked the earth unaging and immortal. He preached bitter words against the Lord who damned him.

The Babylonians worship all gods but the Lord that banished Cain: "Any god but Him." It was the Babylonians who built the Tower of Babel so that they reach and seek even more unknown gods. It is unknown if any were found.

The enormous Tower of Babel still stands, and all men enjoy one common language.

Far to the north, the Celt tribes live in relative barbarism in a cold, magical frontier. Their pantheon of gods much more numerous than the civilizations to their south, and their gods walk and lead among their mortal worshipers.

In the past, the Egyptians were strong allies of Atlanti and have learned much. Their nations grew apart as the Pharoh's gods and egos could no longer tolerate the Atlanti arrogance. The Egyptian empire is second only to the Atlanti and the two nations live in a cold war.

Although not nearly as advanced as the Atlanti, the Egyptian Aurichs enjoy high technology, hermetic wizards, and a very strong pantheon of gods and goddesses.

Spanning the area from all the way just west of Athens, across the Adriatic sea to the Siciliatic peninsula this relatively peaceful and large nation holds a myriad of species and welcomes any species that can comprehend and add to philosophical thought.

The children of Zeus (Jupiter) have a strong empire south of the Celts, but far enough across the sea from Egypt to enjoy its independence and relative peace. They keep relatively neutral to the goings on between the Atlantis and the Egyptians, but have been known to pry their hands into the affairs and conflicts between the two great nations

Orichalcum is a mythical metal that Atlantis made legendary. It was known to be an alloy similar to brass, but there were more varieties with a plethora of practical uses. Legendary Atlantis takes this metal and makes several very useful materials for the exploration and conquest of the Wild Earth.

In addition to the wonderous properties of Orichalcum, there is running water, steam locomotion, and many other technologies which make day-to-day living more civilized.

Gold Orichalcum is an alloy of gold, copper, and zinc. It will oxidize only during the course of many generations and in turn is used for currency and decoration. It is beautiful and sparkling in the light, but seems to have no practical purpose.

Red Orichalcum is an medium to dull red semi-flexible alloy of copper, zinc, and a bright red quartz. Red Orichalcum will expand or contract when energy is applied depending on the forging. This is commonly used for moving objects, and is commonly known as "Muscle Metal."

This theoretical alloy has unknown properties.

Not to be confused with Gold Orichalcum, Vidilcum has the ability to "borrow" or "copy" light and sounds from a remote location and focus it into another location. It's a powerful but finicky material which can be used for voice to voice and sometimes even face-to-face communication at a distance. It takes much skill to calibrate devices using this material and often fails, but rarely fails dangerously. It just doesn't work if *anything* is not perfect.

This theoretical alloy is not to be confused with Gold Orichalcum. It has unknown properties.

Green Orichalcum is an bright green alloy of copper, zinc, and prasiolite. Green Orichalcum stores energy like a battery or capacitor for use later. It glows brighter the more energy that is held. Over centuries the energy will dissipate due the glow.

Blue Orichalcum is an alloy of copper, zinc, and dumortierite. This mineral redirects energy into a beam of pure energy. This energy can be used to transfer energy or as a weapon.

Indigo Orichalcum is an alloy of amethyst, zinc, and dumortierite. This mineral can redirect energy (both pure and kinetic) away or into a Adgelcum battery

Violet Orichalcum is an alloy of amethyst, zinc, and copper. When energy is applied to this difficult to create alloy, it crawls along the Aether to make motion. The more energy that is applied the more motion is created - even enough to defy gravity!

Dark Orichalcum, Black Orichalcum, or Void Orichalcum is an extremely hard alloy of a black quartz, zinc, and copper. It is harder than iron and absorbs most energy transferring it to the edges of the material.

White Orichalcum or Silver Orichalcum is an alloy of a bright white quartz, zinc, and copper. When energy is applied to White Orichalcum glows a cutting and burning energy that can even, with time or effort, cut through Armalcum. It is quite useful as both a tool and a weapon.